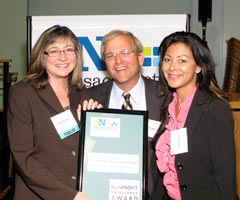 The Institute and its National Autism Center were named the winners of the Massachusetts Nonprofit Network’s (MNN) Excellence Award for Communications at the second annual Nonprofit Awareness Day at the State House in June. May Institute was one of only 10 nonprofits selected as winners from a field of 150 nominated organizations and agencies.

During a recognition ceremony attended by Governor Deval Patrick, Massachusetts legislators, and hundreds of individuals representing nonprofits from across the Commonwealth, May Institute and the National Autism Center were recognized for the launch of the National Standards Project and the international dissemination of the National Standards Report, the most comprehensive analysis of effective treatments for children and adolescents with autism spectrum disorders (ASD) ever published.

The Institute was also recognized by MNN for its public awareness efforts including its “What Does Autism Look Like?” autism awareness campaign displayed throughout the Massachusetts Bay Transportation Authority (MBTA) system during Autism Awareness Month in April 2009. The campaign featured hundreds of “T” posters and educational “car cards” on MBTA trains, subways, and buses. Due to the success of that campaign, the Institute – with sponsorship from LoJack Corporation – launched an expanded autism awareness campaign on the MBTA this year.

May Institute won three additional awards for the launch of the National Standards Project and the autism awareness campaign on the MBTA from the Publicity Club of New England, and the New England Society for Healthcare Communications (NESHCo).

In addition, NESHCo presented the Institute and its National Autism Center with an award for the Evidence-Based Practice and Autism in the Schools manual. This comprehensive guide for educators who work with students with ASD includes important findings from the National Standards Report. More than 50,000 individuals from around the world have requested copies of the manual and the reports, which are available for free download, or for purchase, from the National Autism Center website.

“These awards are meaningful to our organization because the work they represent reinforces our mission,” said Eileen G. Pollack, M.A., Vice President of Communications and Public Relations at May Institute. “We are always seeking ways to increase awareness about significant public health issues, such as the rising incidence rates of autism, and to create opportunities for individuals to access critical information and services.”

May Institute’s five awards are as follows:

About May Institute
May Institute is an award-winning nonprofit organization that provides educational, rehabilitative, and behavioral healthcare services to individuals with autism spectrum disorders (ASD) and other developmental disabilities, brain injury, mental illness, and behavioral health needs. The Institute also provides training and consultation services to professionals, organizations, and public school systems.

In response to the tremendous increase in the prevalence of ASD, May Institute founded the National Autism Center in 2005. This May Institute Center is dedicated to serving children and adolescents with ASD by promoting best practices and offering comprehensive and reliable information to families, practitioners, and communities. In 2009, the Center’s unprecedented multi-year project — the National Standards Project — established a set of standards for effective, research-validated educational and behavioral interventions for children with ASD.

Together, May Institute and the National Autism Center are committed to identifying and applying universal standards for the treatment of autism and to providing care and hope to families throughout the country. For more information, contact 800.778.7601 or visit www.mayinstitute.org.